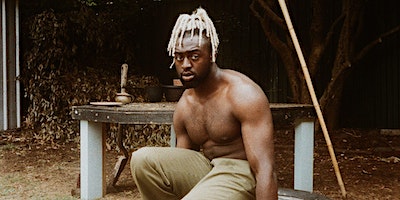 At just 22 years old, Kwame, the Ghanaian Sydney-based producer, writer, artist and engineer is one of the most recognisable names in Australian music - known for delivering witty lyricism and diverse production. 'NOBODY feat. E^ST’, premiered by Zane Lowe on Apple Music's Beats 1, and ‘STOP KNOCKIN’ @ MY DOOR!’ mark the bold beginnings of a new project coming in 2020, and follows on from his hugely successful Endless Conversations. EP (7M streams).

Cultivating culture is Kwame's specialty and there aren't many who have managed to break the mold like he has in the last year. Sparking acclaim for previous singles 'WOW' and 'NO TIME', Kwame took out triple j's 'Unearthed Artist Of The Year’ title. Among performances at SXSW, Splendour in the Grass, and appearances alongside industry heavyweights such as Migos, Skepta, 6lack, AJ Tracey and Peking Duk's biggest tour ever, Kwame also sold out all nine dates on his 2019 ‘CLOUDS’ tour.

Teaming up on the track ‘Summer Rain’ with Wave Racer, Kwame then joined Matt Corby on Triple One’s ‘So Easy’. 'NOBODY feat. E^ST’, is arguably his most reflective work to date and a clear indication of the heights this boundary pushing artist is hoping to take Australian hip-hop to.

NOBODY is the second single taken from Kwame’s third extended play, released via Def Jam ANZ.