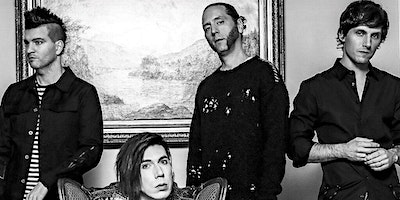 Hitting #1 on iTunes Pop chart here and in the USA, as well as their native Canada, Phantoms is Marianas Trench’s fifth studio album following their 2006 debut Fix Me, Masterpiece Theatre (2009), Ever After (2011) and Astoria (2015).

Marianas Trench draw on well-established strengths – their trademark, heavily layered harmonies, as well as blazing guitars set against club-worthy beats - but Phantoms also finds the Vancouver-based four-piece pushing their musical boundaries relentlessly. From the jaw-dropping opener, ‘Eleonora’ – a heavily layered a cappella salute to Edgar Allan Poe’s 1842 short story of the same name – to the unapologetically epic closer, ‘The Killing Kind’, with its deep orchestration, ripping guitars and vocal gymnastics. “Each time we do an album, I try and write something that’s out of my vocal reach that forces me to get better,” says founding member and frontman Josh Ramsay, adding that bassist Mike Ayley, guitarist Matt Webb and drummer Ian Casselman, his “three favourite collaborators,” are equally dedicated to pushing their limits vocally and instrumentally - making for a dynamic live show.