BON BUT NOT FORGOTTEN 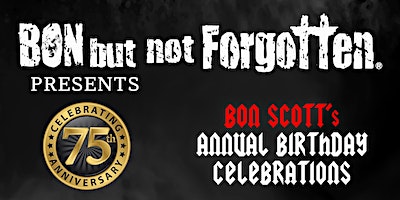 2021 Marks the 75th Birthday of legendary AC/DC Singer, Bon Scott and Bon But Not Forgotten is rolling out its Classic Albums tour to celebrate!

Bon But Not Forgotten assembles some of the world’s greatest rockers to perform two massive sets playing both the “Powerage” and “Let There Be Rock” albums in their entirety.

In 1977 came AC/DC’s defining moment: LET THERE BE ROCK! The album went 5-time platinum in Australia featuring the title track “Let There Be Rock”, “Whole Lotta Rosie” and “Hell Ain’t a Bad Place To Be”!

This World Class Line-Up returns for their 11th Anniversary Tour, featuring Simon Wright (Ex-AC/DC), James Morley (Angels/Choirboys) and Cynthia Gallie (Let There Be Rock Orchestrated) plus special guests to be announced, this show will bring you these classic tracks plus some perennial favourites, cooked to perfection.

LET THERE BE ROCK!!