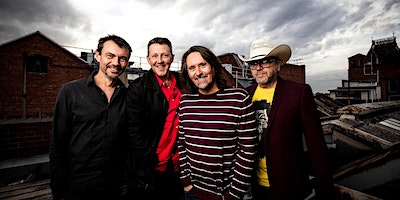 30 years ago, at a Carlton share house, Michael Allen would arrive at the door with some beer and he and Greg Arnold would sit around singing harmonies - just for the fun of it. Then Tony Floyd joined in with some more harmonies, only now, they had some drums, and Things of Stone and Wood was born.

Since then they’ve managed to have two top-ten albums, a top four radio hit with “Wildflowers”, tour Australia and the world, and win ARIA and APRA songwriting awards.

Also, they even enjoyed a surprising moment of sunshine in the grunge-grey sky of the early 90s with their joyous hit “Happy Birthday Helen”.

At the forefront of the folk and roots scene their innovative usage of acoustic instruments helped pave the way for the next wave of artists such as John Butler, The Waifs and Angus and Julia Stone.

On this tour they will be joined by their long-time collaborator James Black (Rockwiz, Mondo Rock) who, as producer, was so important in carving out their unique sound.

The band reunited in 2014, and has been playing sold out shows and major festivals to the same enthusiastic response from their dedicated audience. With meaningful lyrics, and passionate, energetic performances, a Things of Stone and Wood show is always an uplifting and emotional affair.

And they still don’t mind smashing out a big harmony either. On their 30th anniversary tour they'll play all of their hits, plus new material from their forthcoming album: The Final Forest. Their first release in over a decade!