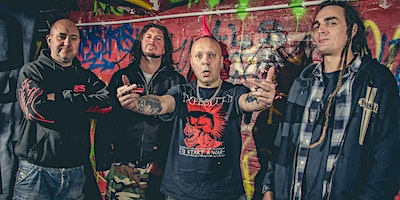 THIS SHOW HAS BEEN RESCHEDULED

1979, and Wattie Buchan and his mates were seriously pissed off. Angry at what was happening around them - a country in disarray, greedy politicians treating the people like shit; and with Johnny Rotten’s prediction of “No Future” truer by the day, there was only one way forward – embrace the music that had given you so much and give it something back… your entire life!

The Exploited continue to deliver the mayhem live – ‘Sex and Violence’, ‘Army Life’, ‘Fuck The USA’, ‘Troops Of Tomorrow’, ‘UK ‘82’ and ‘Cop Cars’ represent just a taste of the anarchy that the Exploited bring to every show.

The Exploited are just as relevant today as they were in 1979 and with the band’s loyal squadron of fans The Barmy Army in tow, The Exploited are set to unleash 40 years of fury, anarchy and chaos upon Australian and New Zealand.

Meet and Greet with the Artist

Photo with the Artist on the fans own phone or camera

2 items signed by the Artist