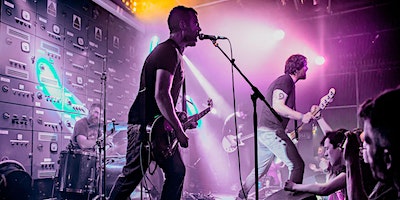 Handsome Tours is delighted to present, for the first time in 15 years, mclusky*. Featuring Future of the Left members Andrew Falco Falkous and Jack Egglestone, with the addition of Damien Sayell from the St Pierre Snake Invasion, the Cardiff outfit will be playing venues in Perth, Adelaide, Melbourne, Sydney, and Brisbane in January.

mclusky were a band between 1999 and 2005, in which time they made a few friends and three albums. Slow-forward 14 years and, thanks to the uncanny pull of nostalgia and gravity, they have made more friends but no more albums. Originally persuaded to reform - like ham - to help save a local music venue and for other vaguely charitable reasons, mclusky* is the band but with Damien Sayell of The St Pierre Snake Invasion (who incidentally have an album out this year) playing bass and singing and is loads better (technical term) than it used to be, nostalgia be twatted directly in the eye.

There is one quiet song, at the start, then the rest is just soup.

The post-hardcore group may have split in 2005, but their reputation has grown in their absence. Witty, acerbic and brutal, it’s often hard to comprehend why they weren’t bigger.

An unadulterated joy… no one could possibly be leaving disappointed from this.”

mclusky* blow away any doubts within the first few bars, with every satire-barbed lyric and Malcom Tucker-grade profanity screamed back at them from a tangle of flailing limb in the front rows.