AN EVENING WITH MATTY MATHESON (CANADA) 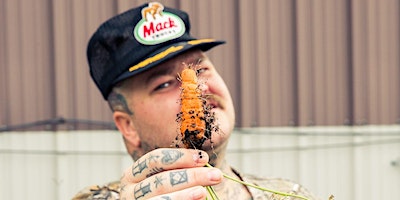 Secret Sounds presents An Evening with Matty Matheson, a night of unedited spoken word conversation with the big man himself giving insight into his life, career and a sneak peek into his new show Sharing the high and lows of his life, Matty Matheson will meet with his audience for a no holds back conversation and Q&A

Coming back to Australia, Matty Matheson says “I love flying back in time to visit my favourite place in the whole world, Australia, you rock dog”

Matheson has transformed from early New Brunswick beginnings to the newly appointed face of the TV chef From his two highly successful TV shows, Dead Set On Life and Suppertime, Matheson’s skill set and charism have propelled him to internet superstardom with a dedicated social media following

Having featured on Jimmy Kimmel Live, The Seth Meyers Show, The New York Times, GQ , Rachel Ray, The Guardian, Forbes & Bon Appetit it’s safe to say Matheson is known as much for his delicious food as he is to his larger than life personality Adding another hat to his already stellar career, in late 2018 Matheson became a NY-Times best-selling author with his book Matty Matheson: A Cookbook The book touches on family recipes, early inspirations and current day favourites all while sharing stories that are equal part heart-warming and inappropriate Going strong, Matty has signed on for a second cookbook to be released in late 2020

An Evening with Matty Matheson will be the live intermission between the encore cookbook Every detail of the night will be intrinsically Matheson, even the music will be controlled by his own playlist to set the tone for the evening With a slew of followers around Australia, Matheson has listened to his audience setting tours from Perth to Wellington

On bringing Matheson out to our shores, General Manager for Secrete Sounds Touring, Sam Shaw says: “We couldn’t be more excited to be working with Matty Matheson in Australia & New Zealand! As we’re all self-confessed foodies, it felt like a logical next step to bring Matty into the Secret Sounds family and be able to create something special for all his fans down here – We’re always looking for new and interesting opportunities to connect fans with their favourite artists regardless of subject so this is no different’