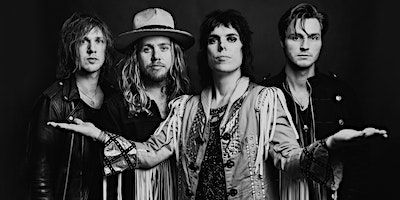 THE STRUTS RETURN TO OZ!!!

– Britain’s hottest rockstars are back this August – UK glam-rockers THE STRUTS will make a triumphant return to Australian shores this August. Currently on their Young & Dangerous world tour, the band will play shows at Melbourne’s Corner Hotel, Sydney’s Factory Theatre, and Brisbane’s The Triffid.

Recently in Australia as support for Greta Van Fleet, the band won over a whole legion of fans with their spectacular stage show, and they also added their own surprise headline shows in Melbourne, Brisbane and Sydney that had all cities in a buzz.

Hailed as the next Queen, with singer Luke Spiller drawing favourable comparisons to Freddie Mercury, The Struts have opened for The Rolling Stones, The Who, Guns’n’Roses Foo Fighters and Motley Crue, and are now selling out headline shows in their own right.

Released late last year via US label Interscope, sophomore album Young & Dangerous has taken the band to new heights, with Elton John spinning it on his BBC1 show, Spotify streams topping 20 million a month, and invitations to play The Tonight Show with Jimmy Fallon, Jimmy Kimmel Live, America’s Got Talent and the Victoria’s Secret Fashion Show rolling in. Foo Fighter Dave Grohl has declared them “the best opening band we’ve ever had”.With their globally loved songs “Body Talks” (feat. Kesha), “Could Have Been Me” and recent single “In Love With A Camera” fast becoming classic rock anthems, make sure you don’t miss the chance to catch one of the most talked about bands on the planet.

“Unashamedly channelling Queen and Slade, the Derby band are in gleeful form as they stand on the edge of the big time… 5 stars” – Live Review, Dave Simpson, The Guardian

The Struts have partnered with PLUS1 so that $1 from every ticket sold will go to Beyond Blue and their work providing information and support to help everyone in Australia achieve their best possible mental health, whatever their age and wherever they live. www.beyondblue.org.au