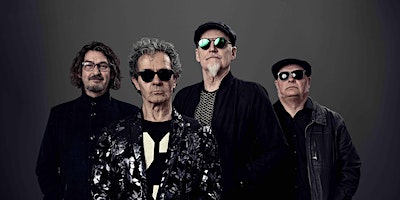 Now the band have curated a special show that partially embarks on the band’s indulgence of Creedence Clearwater Revival. The band have hand selected six CCR classic hits, all performed in Choirboys’ own inimitable style. And if CCR isn’t your thing, no fear, Choirboys are performing all their hits and fan favourites with 70% of the set Choirboys anthems!

This is the band’s salute to six of the best songs from CCR – a band that heavily influenced four boys from Sydney’s Northern Suburbs forty years ago. A band that helped influence the humble 4-track EP that would lead Choirboys to their first recording deal with Alberts and inevitably begin the Choirboys journey.

“I was in the backyard of my family home,” recalls singer Mark Gable. “The radio was on and what drifted out the back windows was Green River by Creedence. I was instantly in love with this song and the band that created it. Like the millions of things we do in our lives that are mundane, boring and forgotten I have no idea what I was doing in the backyard at that time, but when I heard CCR that day it embedded that moment forever in my mind; the sky, the colour of the house, and even the paint peeling off the back railings.”

Not only have Choirboys recorded these hits – which is available for free download at http://po.st/ChoirboysCCR – but they have decided to take them to a small number of selected venues for a real pub rock, revival!

It’s time to get down to your local and embrace Choirboys’ full live experience – loud sweat driven, gritty and in your face! Long Live CCR and Choirboys.