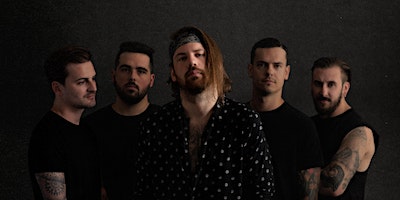 Colombus, Ohio hardcore band BEARTOOTH are bringing their ‘The Disease Tour’ downunder. Having toured new album Disease extensively across the USA and Europe, they’ll be making their way to Adelaide, Melbourne, Sydney and Brisbane this July 2019 for four relentless shows of riff-driven intensity.

Led by multitalented instrumentalist and songwriter Caleb Shomo, BEARTOOTH are now three albums into a remarkable career that has seen them fast become a headlining festival act due to their raw, dynamic and theatrical live show. They’ve collected awards from heavy and hardcore tastemakers Kerrang!, Metal Hammer Golden God Awards and Loudwire Music Awards, all the while cracking the metal and commercial charts worldwide.

Previous releases on Red Bull Records The Sick EP (2013), Disgusting (2014) and Aggressive (2016) have won the group a legion of loyal followers, but it’s the new and third full-length album Disease that has seen them cement their reputation as a global force in the hardcore genre. Disease is brave in its painstakingly riff-driven examination of the demons that come from a dark depression.

“The album is a whirlwind of emotion,” Shomo explains. “Crazy highs, crazy lows, and lots of intensity. This record isn’t about winning anything. It’s about trying to even begin to learn how to deal with things. It’s hard to process just how dark you can get, what you can really put yourself through with expectations. It’s like starting from the beginning all over again. At the end of the day, it is a very dark album.”

“Get your fists in the air, embrace someone you care about and come grab life by the throat with Beartooth!” – Heavy Mag

• Meet Beartooth for a photo opportunity by professional photographer

• Priority Entry into the venue**