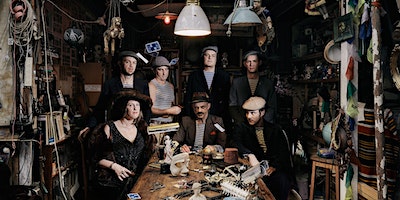 DJ Poeks before & between sets

Everybody's favourite Russian criminals make their long-awaited return to Australian stages, launching the first single and video clip off their upcoming full-length album, "The Odessa Job". The band has amassed an incredibly dedicated fanbase over the last 14 years, but for those who don’t know, VulgarGrad are a seven-piece band that play music by, for, and about Russian criminals – raw, raucous, and rude (particularly if you understand Russian).

VulgarGrad frontman and infamous Polish ne'er-do-well, Jacek Koman, has been just been released from penal servitude in the chilly film and TV studios of Warsaw, but only on a temporary basis. VulgarGrad are only likely to have a handful of Australian shows in 2019, so make sure you catch them before they get away.

"I Remember" is a psychedelic Soviet prison ode to the memory of dear mama, who always warned us not to hang out with thieves. This is the first single off the band’s upcoming album, "The Odessa Job" - the band's first full-length release in 10 years!