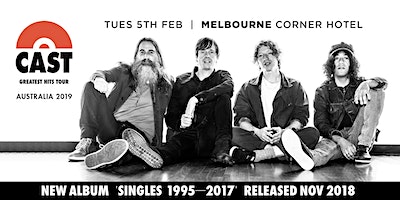 After two long years bunkered down in their hometown of Liverpool recording their latest record ‘Keeping Up The Dust’, 90’s Britpop legends Cast announce their return to Australia, with their ‘Greatest Hits Tour’ landing in 2019.

With six studio albums worth of platinum selling material under their belts, the UK four piece will be landing in Australia in February next year, where they’ll be performing a collection of top ten hits from 1995 to today.

With shows in Brisbane, Sydney, Melbourne and Perth, fans across the country can look forward to hits from the bands 20+ year history, including ‘Finetime’, ‘Alright’, ‘Sandstorm’, ‘Walkaway’ and ‘I’m So Lonely’.