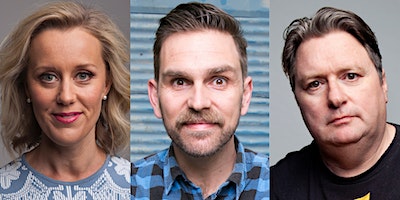 The Corner Hotel presents Corner Comedy - a triple headliner bill featuring the best in the business! We are very excited to present this great line up...

Claire is a born storyteller with a sharp wit, and plenty of charm who has captivated audiences across the country crafting engaging, innovative live shows that blend stand-up, theatre and some hammer dancing! She starred as team captain on Good News Week and is co-host of The Great Australian Bake Off on Foxtel’s LifeStyle Channel.

If you haven’t seen Dave O’Neil before you probably haven’t been to comedy in Melbourne. As well as stand up, Dave is known for his TV and radio appearances which are too numerous to mention. His podcast with Glenn Robbins has had more than a million downloads and Dave has appeared on Spicks and Specks more than any other guest.

Harley is an award-winning comedian, TV host and radio personality who has won over a legion of fans across the globe with his accessible and relatable stories and style. Harley hosts critically acclaimed TV show Taboo and appears regularly on Hughesy, We Have A Problem and The Project.