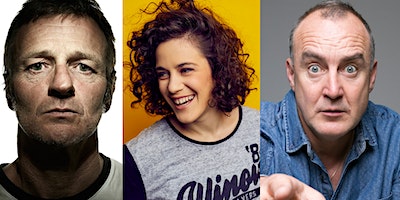 The Corner Hotel presents Corner Comedy - a triple headliner bill featuring the best in the business! We are very excited to present this line up that we thought would never happen. This show was cancelled due to the February Melbourne lockdown and somehow the stars have aligned and we’ve got the gang back together!!

Bob is a legend of Australian comedy. Often referred to as the comedian’s comedian, Bob is an award winning writer, director, author and actor who has popped up in TV and film including Jimeoin, The Librarians, Bad Eggs, and Thank God You’re Here.

'Like an ancient alchemist, Franklin knows how to blend comedy and the weird in just the right amounts.' - Herald Sun

Jude Perl is a multi-award winning singer, songwriter and comedian. She has created a name for herself by writing and performing hilarious, yet brutally honest, stream-of-consciousness style lyrics, set to undeniably catchy and well-crafted songs.

“Punny, engaging and clever. She belts out a song with all the energy and dynamism of Stevie Wonder” - The Australian

Jimeoin is one of the hottest stand up comics of this generation - a true comedy master. A prolific writer with exceptional audience rapport, he is known and loved for his brilliantly funny wit and charming observations on the absurdities of everyday life.

'Hilarious... If laughter is the best medicine, Jimeoin is a course of steroids…” - Edinburgh Evening News