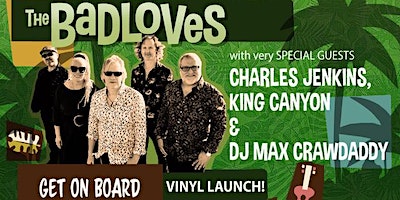 DJ MAX CRAWDADDY BEFORE, BETWEEN & AFTER SETS

The Badloves, Australian Tour kicks off at the Corner Hotel to celebrate the vinyl release of their hit album “Get On Board”, and they’ll be joined on stage by their original backing vocalist, the superb Susie Ahern.

Released in July 1993, The Badloves debut album “Get On Board” spent a massive 69 weeks in the charts, peaked at number 5 and achieved double platinum sales; delivering four hit singles in, “Lost”, “Memphis”, “I Remember” and “Green Limousine”.

Eighteen months later “Get On Board” was nominated again for Highest Selling Album at the 1995 ARIA Awards.

* On 2 April 2021 Warner Music will be releasing “Get On Board” on vinyl for the first time and as a digital deluxe that will include unreleased tracks from their 1993 Triple J Live At The Wireless session.

The blues-fuelled project is built on killer guitar riffs and soulful vocals, and recalls the powerful sounds of 60s Soul and the 70s British Blues invasion.

King Canyon have wasted no time in recording material including singles “Woman” and “Smoke Stack City” both receiving radio support, then promptly followed up with the soulful “Long Distance”, and a smokey acoustic blues version of the classic hit “Evie”.

Their latest single is the heavy guitar driven “Pretty Little Thing” as a precursor to their debut album planned for late 2021.