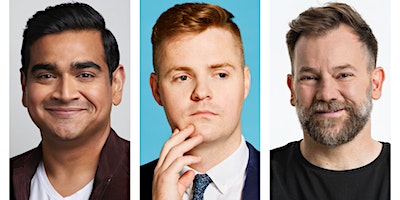 All tickets are general admission. There will be a limited number of tables and chairs up the front on a first come first serve basis.

PLEASE NOTE DUE TO NEW COVID TRAVEL RESTRICTIONS CLAIRE HOOPER IS UNABLE TO PERFORM TONIGHT. SHE WILL BE REPLACED WITH DILRUK JAYASINHA

Dil is one of the most in demand headliners on the Australian comedy scene, but that's not all...as well as an ABC special he has appeared on Have You Been Paying Attention, Hughsey We Have A Problem, I’m A Celebrity Get Me Out Of Here and Utopia. But to top it all he has won a freaking Logie for popular new talent in 2018!

You know Tom Ballard for his four year stint hosting triple j Breakfast and as host of the edgy satirical comedy program Tonightly on ABC Comedy. His live shows have won critical acclaim, nominations, awards and rave reviews. He is one of the country's most exciting and insightful comedy voices.

Stand up, radio, TV, Lehmo does it all, from his hilarious character Jim on ABC’s Utopia, to regularly presenting sports programs on ABC radio. He hosted breakfast on Gold FM and currently does breakfast on SAFM. He is one of Australia’s most experienced and well-travelled comedians. His live work has seen him headline at comedy clubs for well over fifteen years and work all corners of the globe.