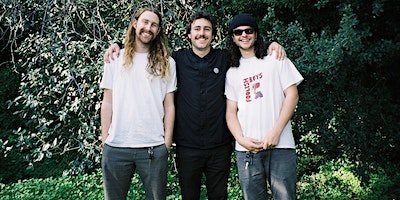 LIMITED TICKETS AT THE DOOR $30

The Grogans ‘Out Of Iso’ VIC Shows are set to take place Early December 2020, following the release of the bands second album 'Day / To / Day’.

These will be the bands first ‘physical' shows since lockdown began in March. This is a seated gig, with tickets being very limited to follow COVID safe guidelines.

Coupling effortless cool with refined rock songwriting chops, Melbourne trio The Grogans unveil their second studio record, Day / To / Day. An album that has been designed to be absorbed, Day / To / Day is a sonic journey that has The Grogans delivering melodies, rhythms and great energy throughout.

Last month saw the band release single ‘Got A Girl’, a track that offered an insight into the charged up end of the album’s spectrum. Yet as the listener makes their way through its 12 track run time, The Grogans flourish as 60’s and 70’s surf rock sounds come together with contemporary slacker influences; all up making for a perfect Spring/Summer soundtrack. Even the album image, taken by seminal 60’s surf photographer John Witzig, perfectly encapsulates the cheeky escapism found in Day / To / Day.

Recorded at Grogans HQ and out in Ocean Grove, Day / To / Day had the opportunity to come together outside of Melbourne, with Ocean Grove providing an idyllic relaxed setting for The Grogans to settle into. Spending their time making music, skating and hanging out made the album process far easier an experience to get through; with new ideas and sonic sessions coming naturally for the band over time.

“[The recording process] same as what we usually do; a couple of months writing, then we take a week off and lock ourselves away to get the majority of the recording done, then polish it up with added tracks at Grogs HQ. This time was in Ocean Grove, which was really relaxing. We’d surf, skate and just hang out without too much structure to the recording.”