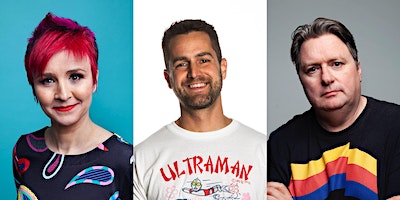 PLEASE NOTE: Tickets are $30+booking fee per person. When you select a table you will be prompted to purchase all of the tickets for that table at once.

Cal WIlson is another great New Zealander we should now claim as our own! A favourite on just about every comedy panel on Australian TV her live work has won acclaim as well. Known for her partly improvised solo stand up shows, Cal starred in the Australian version of Whose Line Is It Anyway and has appeared on QI with Stephen Fry.

Hitting our shores from Venezuela in 2012 Ivan smashed into the Australian comedy scene in a big way. His observations on Australian culture and food have gone viral and led him to sell out seasons in festivals here and around the world. He has toured the nation many times with the Melbourne Comedy Festival Roadshow and has a TV series and a TV special under his belt.

“One to watch for hearty laughs”- Herald Sun

'Give this man citizenship...he's sure to have more to contribute to the Australian comedy scene.' - Chortle UK.

If you haven’t seen Dave O’Neil before you probably haven’t been to comedy in Melbourne. As well as stand up, Dave is known for his TV and radio appearances which are too numerous to mention. His podcast with Glenn Robbins has had more than a million downloads and Dave has appeared on music quiz show Spicks and Specks more than any other guest.