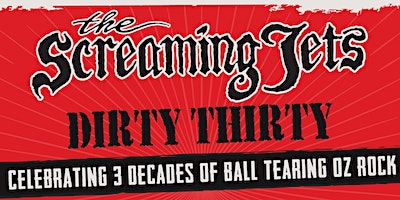 Celebrating 30 years The Screaming Jets are taking a step back in time and revisiting their musical history Songs like ‘Sister Tease’, ‘Stop The World’, ‘Blue Sashes’, ‘Think’, and many more gems are due to be unwrapped and unleashed onto Jets fans in a select few shows with special guests in THE POOR, THE CELIBATE RIFLES and BOOM CRASH OPERA in tow to celebrate their journey over 3 decades in the music business!

Fans should get ready for The Jets to blow their ears and minds away with a live retrospective of the bands thirty year career… 8 studio albums, 2 live albums, 3 EP’s With well over 100 original songs in an extensive rock catalogue, The Screaming Jets are going back to their roots and uncovering songs they possibly haven’t played for years… A recent poll of fans could see the boys pull out favourites such as ‘Living In England’ & ‘Meet Anybody’ (Living In England EP), ‘Everytime’ & ‘Night Child’ (Tear Of Thought album) and ‘Life & Death’ (The Screaming Jets self titled album) to name a few popular tunes from their extensive catalogue

Not much has changed since 1989 when nobody knew the potential of this bunch of hard rockin’ blokes from the burbs of Newcastle Belligerent, ball tearing rock was their calling card By 1990, they busted out of Steel Town to introduce themselves to the wider worldof Kings Cross, the wild Aussie pub rock scene and the international stages of the US, UK and Europe The Screaming Jets kicked down the door and they were coming inside like it or not

Blistering and face melting live shows, littered with great songs, and controversy on and off stage in equal parts There were many detractors who thought the Jets would burn out and be consigned to the scrap heap of rock soon enough How wrong they were!!!!

Fast forward 30 years, countless gigs and over a dozen albums and The Jets are a household name Obviously not in some of the more high falutin’ households and especially not the Hinze, Bjelke Peterson or Clive Palmer households,

But in the heartland working class strongholds, they sit proudly alongside Chisel, The Angels, the Choirboys and the other bands who have shaped Oz Rock as we know it today and will continue to do so for many years to come…