A. SWAYZE & THE GHOSTS 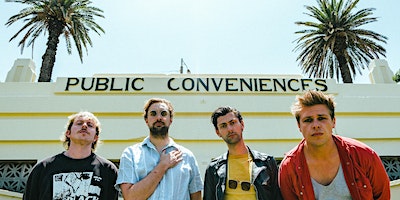 At a time when some young bands seem more concerned with social media followers than having something to say, Paid Salvation is a refreshingly real breath of fresh air, one that restores your faith in the incendiary, uplifting and subversive power of punk rock.

The Hobart natives have amassed a fierce live following thanks to their raw, bold and at times, wild shows – heightened by the notably charismatic and enigmatic lead singer, Andrew Swayze.

Over the last two years A.Swayze & the Ghosts have performed at Falls Festival, Splendour in the Grass, The Great Escape, BIGSOUND (in many ‘best of’ lists across STACK, triple j, Double J, The Music), A Festival Called Panama and Boogie Festival. As well as shows alongside Shame, Total Control, Nude Party, Frank Carter & The Rattlesnakes, West Thebarton, Jet, The Vines, Batpiss & The Stems to name a few. The band have been championed overseas by BBC 6 Music, Beats 1, KEXP, CLASH, NME, Brooklyn Vegan & more, whilst on home soil, supported by community radio, triple j, Double J, The Music, Beat + many more